How much power could the sun give us? 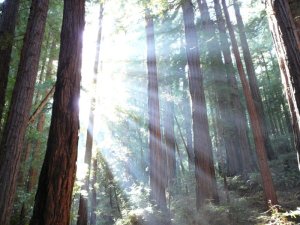 The sun is a nuclear fusion reactor contained by gravity. It emits unfathomable amounts of energy. This map of the power that comes to the USA each day (averaged over the year) has been compiled by the National Renewable Energy Laboratory. It shows that the average power incident on the US is around 6 kWh/m2/day. To put this in perspective, notice that this means that the surface of the USA on average receives 7x1022 Joules of energy / year[*]. In 2007, the entire power consumption of the USA was about 1.4x1019 J. This means that there is about 5400x the energy we use coming down from the sun. Clearly there is more than enough solar power available. This would, of course, require that the entire USA was covered head to toe with solar panels. Since we don’t need 5400x the energy we use, we could shrink the area down by this factor. Running the numbers shows that if we covered something just 1% the size of Texas with 30% efficient solar panels, we’d have all of our power from solar power.

Pros and Cons of Solar Power

Solar power is a very ideal power source. We can capture it passively with solar panels or other collectors. Once the collectors are manufactured, there is no pollution or waste products. There are no moving parts to hurt wildlife. There is no dependence on foreign entities. The energy is produced and delivered for free by the sun.

The sun doesn’t shine at night. This means that in order to power our factories and hospitals through the dark periods, we can’t rely on the sun alone without somehow storing massive amounts of energy. Solar panels take up a lot of space. In overcrowded cities where power consumption is highest and space is scarcest, building massive banks of solar panels could be very challenging indeed. The solar panels and collectors traditionally need banks of expensive chemical batteries and controls that make the cost of using solar power higher than the same amount of power would cost coming from fossil fuels or nuclear power.

As an example of cost of solar power, consider covering 1% of Texas (or 90% of Delaware) with solar panels. Today, a 10% efficient panel costs about $600/m2. Let’s assume that technological advances will allow us to manufacture 30% efficient panels for the same cost soon. At that price, it would cost $3.6 trillion for the solar panels alone, not including the real-estate, battery packs, and infrastructure. Today’s solar panels are sold with a design lifetime of around 26 years, meaning we would have to re-manufacture the panels every several decades. With that money, we could build over 900 nuclear power plants at $4 billion and 1000MW each. That many plants would produce twice as much energy as we use in a year, and they have lifetimes of at least 60 years.

The role of solar

Solar power is a major player in a sustainable energy plan. In sunny areas, many people have installed panels on their roofs to help power air-conditioning, lighting, and other household necessities and found that the panels pay for themselves. Research in solar collection and storage should be a major effort around the world. Even in less sunny areas, there are a few expensive houses that run 100% on solar power, using large battery banks to power them through the nights.

When it comes to powering New York City through the night or manufacturing factories and computer datacenters 24/7, solar has major challenges. Well-funded office buildings and residential areas can find much benefit from solar power, but we will struggle to rely on it alone. As is often said on the news these days, there is no silver bullet, all clean energy must ally and work together.

The energy from the sun can be used in other ways that by converting light to electricity in solar panels. In fact, wind and hydroelectric power are both forms of solar power[*]. Water can be heated by the sun and used in showers. Heat can be reflected onto an engine that turns a turbine, generating electricity. Well-designed buildings can use the greenhouse effect for passive heating on colder days.